Together with 21 organizations, we have written to members of the UN Human Rights Council urging the adoption of a new resolution to protect human rights, justice, and accountability in Sri Lanka.

To the Member States of the Human Rights Council:

We, the undersigned organizations, urge the Member States of the Human Rights Council to pass a strong resolution at the 46th Session, affirming an international commitment to protect human rights and justice in Sri Lanka, with a particular focus on victims. The deteriorating human rights and accountability context in Sri Lanka is documented in detail in the High Commissioner for Human Rights’ damning January 2021 report as well as a joint assessment released by ten UN Special Procedures mandates earlier this month. The High Commissioner highlighted that “nearly 12 years on from the end of the war, domestic initiatives for accountability and reconciliation have repeatedly failed to produce results.” Just as concerning, the High Commissioner stressed the emergence of “early warning signs of a deteriorating human rights situation and a significant heightened risk of future violations.”

Given the Government of Sri Lanka’s failure to comply with the State’s human rights obligations and implement agreed-upon accountability efforts and the need for urgent preventative action, it is essential that a new resolution detail immediate, concrete, and independent international efforts, including enhancing monitoring by the Office of the UN High Commissioner for Human Rights (OHCHR), creating an independent international mechanism to collect and preserve evidence of past and ongoing violations and abuses, and prioritizing support to civil society initiatives.

Multiple UN bodies and dozens of civil society organizations have documented grave human rights violations and abuses in Sri Lanka. The 26-year war between the Government and the Liberation Tigers of Tamil Eelam (LTTE) witnessed serious violations – including allegations of war crimes and crimes against humanity – by both parties. The toll on civilians was particularly high in the final stage of the conflict, when tens of thousands of Tamil civilians were killed, primarily by Government forces’ shelling of “No Fire Zones.”

Following the end of the war, the country remained over-militarized and human rights abuses continued, including extrajudicial killings, enforced disappearances, arbitrary detention, torture, sexual violence, and harassment and persecution of journalists, activists, and government critics. Sri Lanka’s Tamil and Muslim populations have disproportionately suffered from these continuing violations and abuses, as they face institutionalized discrimination and higher levels of targeted state-sponsored violence. Sri Lanka’s domestic accountability efforts have failed. As noted by the High Commissioner, numerous commissions of inquiry established by successive governments have “failed to credibly establish the truth and ensure accountability” and domestic investigations have failed to bring “a single emblematic case . . . to a successful conclusion or conviction.”

Furthermore, despite co-sponsoring HRC Resolution 30/1 in 2015, which provided a comprehensive roadmap of measures to ensure justice and accountability, the Government of Sri Lanka “remains in a state of denial about the past, with truth-seeking efforts aborted and the highest State officials refusing to make any acknowledgment of past crimes.” The High Commissioner highlighted how “the failure to deal with the past continues to have devastating effects on tens of thousands of survivors.”

In the past year, prospects for domestic justice and accountability efforts in Sri Lanka have dimmed entirely. Gotabaya Rajapaksa – the former Secretary to the Ministry of Defense who oversaw the brutal end to Sri Lanka’s war – was elected President in November 2019. As one of its first acts on the international stage, the new Rajapaksa administration announced its withdrawal from HRC Resolution 30/1, part of a series of steps that led the High Commissioner to conclude that “[t]he Government has now demonstrated its inability and unwillingness to pursue a meaningful path towards accountability for international crimes and serious human rights violations.” The Government has also “proactively obstructed or sought to stop ongoing investigations and criminal trials to prevent accountability for past crimes,” promoted credibly accused war criminals, increased militarization of civilian institutions, reversed Constitutional safeguards, increasingly employed and promoted majoritarian and exclusionary rhetoric, increased surveillance and obstruction of civil society, and exacerbated human rights concerns.

In a joint assessment released earlier this month, ten UN Special Procedures mandates echoed the High Commissioner’s concern that the human rights and accountability context had further regressed in Sri Lanka, concluding, “[t]here is little hope that any domestic accountability measures will progress or achieve any degree of credibility.” They emphasized the “extremely disheartening” fact that their conclusions echo those of UN experts in 2009, who found “impunity has been allowed to go unabated throughout Sri Lanka. The fear of reprisals against victims and witnesses, together with a lack of effective investigations and prosecutions, has led to a circle of impunity that must be broken.” We share the High Commissioner’s and Special Procedures’ concerns that continued reliance on the Government of Sri Lanka to improve human rights and accountability will prove futile and dangerous. As both history and recent events in Sri Lanka have shown, if left unchecked, the Government will be emboldened to continue its abuses and further entrench impunity.

Given Sri Lanka’s long history of violations and failed domestic efforts to advance justice, and the warning signs of increased future abuses, it is critical that the Human Rights Council pass a strong resolution affirming its commitment to meaningful justice and accountability for serious human rights violations and abuses and crimes under international law in Sri Lanka. We join the High Commissioner and Special Procedures mandates in calling on Member States to pass a new resolution that strengthens the High Commissioner’s monitoring and reporting on Sri Lanka, prioritizes support to civil society initiatives assisting victims and their families, and establishes and supports a dedicated capacity to collect and preserve evidence. The dedicated capacity should come in the form of an independent international investigative mechanism. We also join the High Commissioner’s call for Member States to pursue alternative avenues for accountability and justice, including “taking steps towards the referral of the situation in Sri Lanka to the International Criminal Court,” the pursuit of “investigation and prosecution of international crimes” in national courts using extraterritorial and universal jurisdiction, and the imposition of targeted sanctions, including asset freezes and travel bans against State officials accused of grave human rights violations.

A strong resolution with concrete action by the Human Rights Council and UN human rights bodies will not only signal to the Government of Sri Lanka that continuing impunity and abuses are not acceptable, but will also affirm for survivors that the United Nations is committed to securing justice for the harms they experienced.

Center for Justice and Accountability (CJA)

International Coalition for the Responsibility to Protect (ICRtoP)

International Movement Against All Forms of Discrimination and Racism (IMADR)

People for Equality and Relief in Lanka (PEARL) 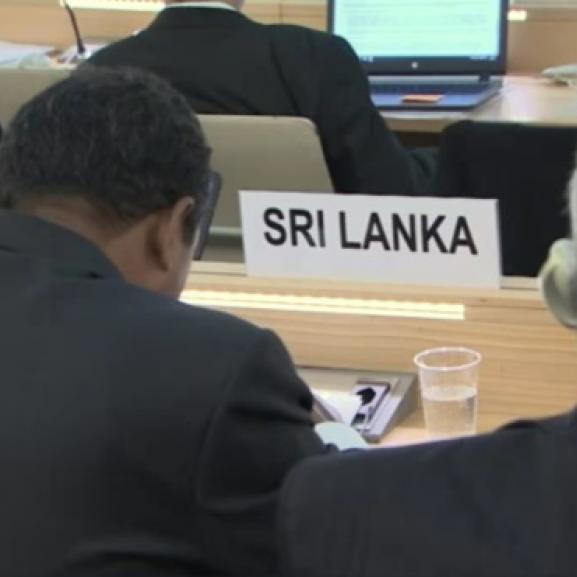